White Snake Projects, Death by Life (May 2021), and Q&A with Composer David Sanford 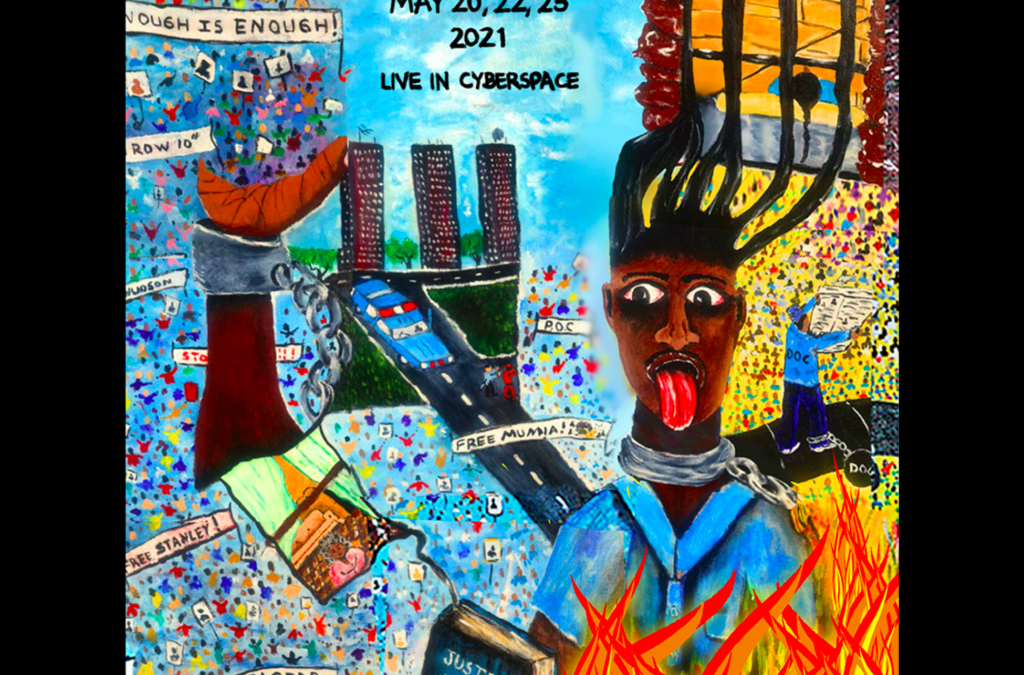 This forum introduces the activist opera company White Snake Projects and their new opera motivated by the Black Lives Matter movement, including Q&A with one of the collaborating composers, David Sanford.

White Snake Projects is a Boston-based “activist opera company founded and led by an immigrant woman of color,” Cerise Lim Jacobs, and committed to “integrating social activism with original opera, partnering with other activists to promote important social issues, and redefining how opera is made by involving a variety of people from outside the musical community.” This often includes extraordinary technological innovation in the service of accessibility and inclusion.

Their award-winning 2020 digital project, Alice in the Pandemic, is a case in point.  Alice, a Black nurse who copes with the horrors of being a frontline worker during a pandemic by abusing opioids, embarks upon a desperate surreal journey to find her estranged mother after she is admitted to an emergency room in an unknown hospital. Lewis Carroll’s Alice’s Adventures in Wonderland and the disorientation of pandemic lockdown converge in an online opera made possible by Epic Games’ Unreal Engine (the same software platform used to create Fortnite), C.G.I. animation, and a plugin that resolved latency issues, allowing singers working remotely to perform together in real time while using a pre-recorded instrumental click track.

White Snake Projects’ current work, Death By Life, is another instance of new activist opera made broadly accessible through technological ingenuity. Described as “an opera exploring the intersection of systemic racism and mass incarceration” in the United States, this project “was conceived as a monument of support for the Black Lives Matter movement” after the murder of George Floyd. As with Alice in the Pandemic,Curvin Huber used Unreal Engine to create the immersive 3D environments, and sound engineer Jon Robertson’s plugin resolved latency issues to facilitate live, simultaneous, remote collaborative performance between singers located in California, Nebraska, Illinois, and New York. Read about the complete creative team, including director Kimille Howard, dramaturg Keith McGill, and musical director Tian Hui Ng, here.

Collaborative partner Alice Kim, Director of Human Rights Practice at the University of Chicago Pozen Center and leader of the Prison + Neighborhood Arts/Education Project’s Think Tank, was key to the project. She introduced White Snake to the writings of numerous individuals who are currently or formerly incarcerated, and the company secured the rights from seven authors to form the basis of the libretto. The authors are Raul Dorado, Mary L. Johnson, Monica Cosby, Andrew Phillips, Phil Hartsfield, Joe Dole, and Devon Terrell. Jacobs brought their primary texts together into a libretto consisting of five scenes. Read the plot synopsis for more details.

White Snake then commissioned five composers, representing a wide range of musical styles, to compose one scene each: Leila Adu, Jacinth Greywoode, Jonathan Bailey Holland, David Sanford, and Mary Watkins. We spoke with David Sanford about his experience working on the project. Sanford’s works have been performed by the Boston Modern Orchestra Project, the Berkeley Symphony Orchestra, the Cabrillo Festival Orchestra, and the Chamber Music Society of Lincoln Center among others. His honors include the Rome Prize and fellowships from the Guggenheim Foundation and the Radcliffe Institute. He is the Elizabeth T. Kennan Professor of Music at Mount Holyoke College, and his new big band album, Prayer for Lester Bowie featuring Hugh Ragin,will be released on Greenleaf Music this September.

JHC: How did you get involved in Death By Life?

DS: My Mount Holyoke colleague Tian Hui Ng is the musical conductor of the opera; he told me about it and, I assume, convinced Cerise to ask me to be a part of it.

JHC: Why did you choose this as your first opera project? Do you think you’ll write another?

DS: Many reasons, but mostly just because I was asked. I haven’t written a lot of vocal music; I enjoy it and I’ve done a lot of singing, but I wasn’t really a big opera aficionado until I was well into my 20s. And I don’t recall a lot of new opera being staged until the last 10-15 years. I’ve had some ideas for operas in the last 10 years, but it’s such a massive undertaking timewise. I ended up very behind in pretty much everything when I took this project on, although I’m very glad that I did.

JHC: Naomi André’s model of engaged opera approaches a piece with three questions in mind: who is being represented, who is telling the story, and who watches and interprets the story.  It sounds like Death by Life takes seriously the need for those who are represented in the story to also tell the story – i.e., these are stories about the experiences of folks who are or have been incarcerated in the US penal system, as told in their own words. Why was that important?

DS: I think a lot of people in the arts are paying attention to African Americans and other marginalized voices right now; popular music has been giving voice to these concerns for decades, if not more than a century, if you consider the blues. Opera has had its verismo subjects, but rarely with libretti written straight from the viewpoint of the characters, or by the characters themselves. I found that very inspiring, that these are stories that need to be heard and felt in the present time. I’m grateful to have been selected to take part in writing the score, and to give musical voice to African American (and white American) characters.

JHC: Cerise Jacobs likes to work on a very short timeline (closer to six months than the three-year development period most opera producers prefer). How did that affect your creative process?

DS: There was a real urgency there. I like to throw out a lot of ideas and settle on one by discarding all of the others, for whatever reasons. I pretty much arrived at my plans and ideas early on and then blocked things out from there. Cerise had the overall form in mind, and we were all given certain limitations of time and process for the virtual aspect which actually made things easier for me (I know you know the Stravinsky quote about constraints), as did the chamber instrumentation. [Stravinsky attribution: “The more constraints one imposes, the more one frees one’s self. And the arbitrariness of the constraint serves only to obtain precision of execution.”]

DS: We were each given scenes to set, and Jacinth [Greywoode] tied them all together through interludes [“Chorus of the Long Term Incarcerated”]. I think everyone “got the scene they wanted,” but I don’t know how early in the process I was asked about it. I considered possibilities if there might be themes from other scenes that could be carried into mine, but my characters, Ed and Phil, don’t reappear in any of the other scenes. As we were writing, we knew the singers’ voices who had been hired.

Sanford composed Scene 2, “Orange Crush,” based on text by Phil Hartsfield. From the plot synopsis:

Cellmates Phil and Ed hear the sounds of a Tac Team entering.  These orange-clad men with protector vests, elbow and knee pads, boots and gloves, helmet with face shields, solid wood batons, three-foot-long shields and spray cans of chemical agents are making a sweep.  Phil and Ed prepare for this shakedown by pouring all liquids down the toilet, stuffing photos, papers, and other memorabilia into suitcases which they shove under their beds so Orange Crush cannot easily destroy them.  Orange Crush goes to a different block. Phil and Ed just dodged a bullet.

Another day, another Crush. Phil and Ed prepare again for the onslaught.  This time, they’re crushed.  They strip down for the search.

The next day they hear the sound of metal clanging and heavy boots running.  They’re back!

The image below shows baritone Nicholas Davis (L) and tenor Aaron Blake (R) rehearsing Scene 2, “Orange Crush.” The production team works with them in front of their green screens in Zoom and monitors how their live feeds look in Unreal Engine. Image from White Snake Projects. 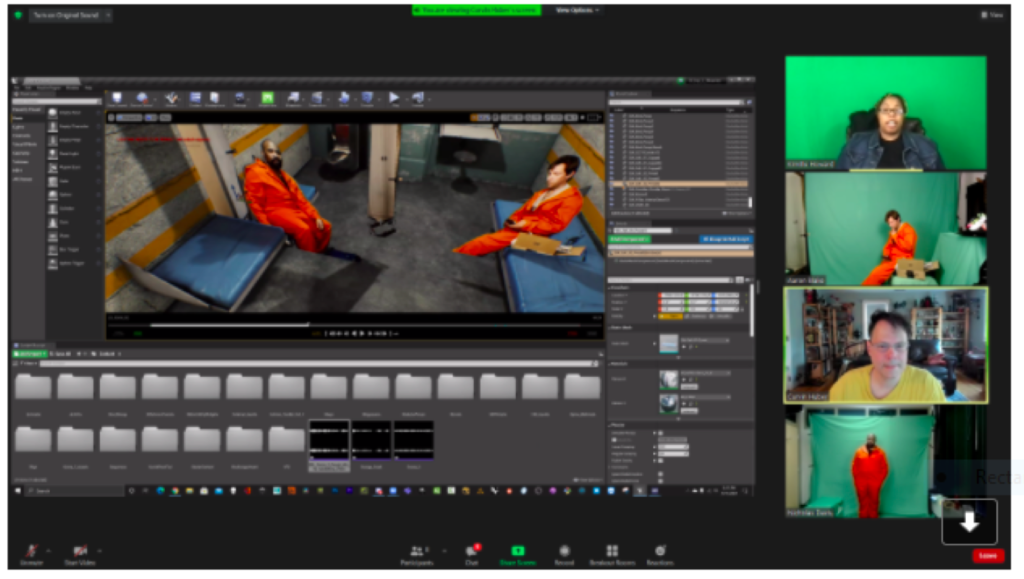 Here is a YouTube clip from Scene 3, “Yard Time with the Animals,” based on a text by Joe Dole:

JHC: White Snake Projects has long used cutting-edge technology in service of its mission as an activist opera company.  Did their technological capabilities inform your creative choices, and if so, how?  Did you use any tech in this project that you had not used before?

DS: I think Jacinth and Leila have done extensive work with electronics, but I heard my part of it as mostly analog with some electronic recreations of acoustic instruments, and I have no facility with the current electronic music technology. I’ve heard some recent things using electronics in the popular realm that were interesting, and I’d have liked to have tried some ideas out, but it would have been purely experimental, for curiosity’s sake.

DS: I don’t have answers regarding labels and definitions. Would Porgy and Bess or Charlie Parker’s Yardbird *not* be “Black opera” by definition? I’ll be honest, this is all very new to me and coming at a time when parenting and department-chairing have pretty much kept me out of the news loops about recent musical developments. Of course I’m more aware of things during the pandemic now that everything has been effectively halted, but other than Treemonisha and Anthony Davis’s works, I wasn’t hearing about operas by black composers until very recently; but similarly, we didn’t hear about Florence Price’s works until recently either (I’ve heard that James P. Johnson wrote several operas, but have never heard their names or of performances). Terence Blanchard being presented at the Met will certainly be a massive event in that regard, and maybe that will open the door for Davis’s works on that stage, as well as those of the younger writers embracing the medium now.